You are here: Home / Thermal Coatings

Emissivity-tailored ARS paint panels on a heat register. Left image is thermal, right is visible. High-emissivity panels are on left; emissivity gets lower to the right hand side of the image.

With conduction and convection, thermal radiation is one of the three modes of heat transfer. It is the mechanism by which we feel hot things without touching them, such as when we put our hand in front of a fire, or step into the sunlight from the shade. In many circumstances it can be the predominant mode of heat transfer. Objects emit thermal radiation according to their temperature. Hotter objects emit more; cooler objects less. In addition to temperature, a surface property known as the emissivity (ε) governs the amount of radiation emitted. Perfect radiators (blackbodies) have emissivity = 1. Perfect reflectors, which do not emit, and are approximated by highly polished, conductive metals, have emissivity = 0. Objects can emit, reflect, absorb, or transmit thermal radiation. Opaque objects do not transmit, and therefore their absorptivity and emissivity are equal — i.e., good emitters are also good absorbers. Another property of opaque objects is that reflectance is complementary to emissivity (R = 1 – ε). Poor emitters are good reflectors.

For objects of most practical concern, which generally have temperatures between –40 and 400°F, most of the thermal radiation lies in the infrared (IR) portion of the electromagnetic spectrum, generally at wavelengths between 2 and 40μm. If all objects in a particular scene were blackbodies, which have no reflectance, an infrared camera could provide a direct reading of surface temperature. As it is, most natural and manmade surfaces have emissivities between about 0.8 and 1.0, so assuming them to be blackbodies is not a bad approximation. The image below is such a scene. Hotter objects appear to be a person in the building on the left side of the image, brakes on the rear driver-side wheel of the car, the sloped rooftop, and the garage bays in the background. Colder objects are the street, particularly in the shade, and the sky, which had a radiative temperature of less than –40°F on the day this image was taken. It was a cool, clear day with air temperature of about 42°F 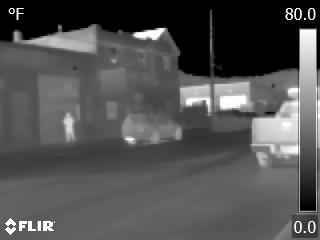 These scenes illustrate the importance of the emissivity and its complement, the reflectance, to the apparent radiative temperature of a surface. It also demonstrates how strongly other objects in the scene can influence the apparent temperatures of low emissivity surfaces. In the present example, the sky temperature, which dominated the reflectance in the first scene, was very cold relative to the ambient air. On days with thick, low-lying cloud cover, however, the radiative sky temperature might only be 10°F or so below ambient, which would make the low emissivity panel appear much less cold than it did in this case. 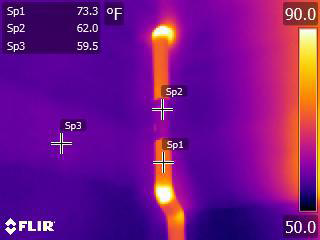 One useful application of modified emissivity coatings is to change the apparent temperatures of surfaces viewed in IR imagery. Objects that are physically warmer than their surroundings, like pipelines, machinery, and humans, typically appear very bright in IR imagery. In the image to the left, compare the insulated water pipe (Spot 1: T = 73°F) to the section in the middle that has a low emissivity coating (Spot 2: T = 62°F) to the general background (Spot 3: T = 60°F). Clearly the section that is coated with a low emissivity material appears much closer to the ambient background temperature than the rest of the pipe does. And yet the two sections of pipe are at the same physical temperature, which is about 14°F warmer than the background. Such employment of tailored emissivity surface treatment has obvious utility for military applications, where IR sensing and IR signatures are exploited to maximum advantage on the battlefield.

But thermal radiation controlling coatings have very practical utility in thermal management. A low emissivity (high reflectance) coating is a very effective way to block the transfer of heat by radiation. Surfaces will exchange heat according to their apparent radiative temperatures. Assuming typical emissivities, if a hot object is placed next to a cold wall, the wall will readily absorb radiated heat from the object. In the IR, the wall appears cold, the object hot, heat flows from hot to cold at a rate determined by temperature difference, as in any heat transfer problem. But if the wall is treated with a low emissivity coating and a hot object is brought into proximity, the wall no longer appears cold. In the left-hand image in the figure below, the man is standing next to a regular wall, the temperature of which is 55°F. The man’s clothing is warmer, at about 70°F. Since there is a radiative temperature difference between the man and the wall, heat transfer will occur via radiation, from the man to the wall, at a rate driven by that difference of about 15°F. In the image on the right, the man is standing next to a treated wall that has low emissivity. Here we can see a thermal image of the man reflected from the wall. The radiative temperature of the man’s clothing is about 67°F in this case and the wall appears to be about 65°F. So again heat transfer will occur, but driven only by a 2°F temperature difference. Heat will thus flow at a much slower rate and the man will notice that he does not feel as cold standing next to the treated wall as he did by the untreated wall. In truth, he emits heat at about the same rate in both cases, but more heat is returned to him from reflection by the treated wall, and therefore his net rate of heat loss is less.

The concept of treating colder exterior walls with low emissivity paints to improve human comfort and save energy was demonstrated in a study performed at the Bauhaus University-Weimar. In winter conditions, the study found that energy savings between 17 and 22% occurred, depending on the quality of the insulation in the building. Energy savings were directly correlated with the physical temperatures of the exterior walls, which ranged from 58 to 67°F. Room temperature was maintained at 70°F and the outside temperature was 23°F. In the study, exterior walls and ceiling were coated with a 0.5-emissivity paint.

Thermal coatings not only provide benefits in cold conditions, they are quite effective at keeping spaces cool when temperatures outside get very hot. In the summer, rooftops absorb intense sunlight and become too hot to touch. This heat is conducted through to the interior side of the roof deck where it is radiated into the attic or workspace, making those areas unbearably warm. Hot attics result in hot ceilings, which require additional air conditioning load to cool. And the effects are noticeably harsher in sheds, shops, and warehouses that are poorly insulated. A low emissivity coating applied to the interior side of the roof and walls slashes the rate of heat transfer that can occur between the hot roof and the cooler interior space. The same rationale can be used to see why. Even though the underside of the roof may be physically hot, a low-emissivity (high reflectance) coating assumes the radiative temperature of the objects that it reflects, rather than its own physical temperature. Since the interior of a warehouse starts out cool in the morning, the apparent temperature of the underside of the roof is also cool, since it reflects the temperature in the space. As the roof gets physically hotter through the day, the underside of the roof continues to appear cool in the IR, so radiative heat transfer is driven by a much smaller temperature difference than actually exists.

Moreover, in the evening, after the sun has retreated, high thermal mass masonry walls that have baked all day in the sun are at their peak temperature. If the walls are not very well insulated, they continue to radiate heat into the rooms for hours after sunset, which is why it is so hard to cool sun-facing rooms by opening windows and running fans at night. A low emissivity paint on the interior surfaces of exterior walls will prohibit most of the retained heat from radiating into the room, making a little airflow much more effective at restoring comfort.

Radiation control coatings are most effective where the surface of a wall or ceiling is significantly hotter or colder than the temperature that one wants to maintain in the enclosed space. If walls are well insulated, this temperature difference is small, and a radiation control coating would not provide much benefit. But for uninsulated or poorly insulated structures, these coatings can be much more cost-effective than retrofitting insulation. They also work well where one wants to thermally isolate spaces, such as engine compartments. Coating the interior walls of an engine compartment with a reflective coating will prevent much of the radiative transfer of heat from the engine to the surrounding walls, making the thermal management of adjacent spaces much easier. 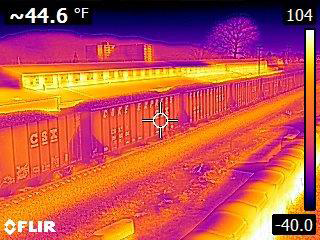 ARS has been developing thermal coatings for applications like these for over a decade. We have formulated thermal coatings in a myriad of different binders, and for a breadth of technical scenarios. From very high reflectance radiation control coatings to moderately reduced emissivity paints, for interior and exterior performance, for comfort, energy efficiency, and thermal control, ARS has engineered coatings to satisfy requirements. Our formulations can be made in a broad gamut of colors, in sheen levels from speckled to matte, and in appearances that give no hint of a tailored emissivity.

If your application requires the control of thermal radiation, we probably have a solution …

This site uses cookies. By continuing to browse the site, you are agreeing to our use of cookies.

We may request cookies to be set on your device. We use cookies to let us know when you visit our websites, how you interact with us, to enrich your user experience, and to customize your relationship with our website.

Click on the different category headings to find out more. You can also change some of your preferences. Note that blocking some types of cookies may impact your experience on our websites and the services we are able to offer.

These cookies are strictly necessary to provide you with services available through our website and to use some of its features.

Because these cookies are strictly necessary to deliver the website, refuseing them will have impact how our site functions. You always can block or delete cookies by changing your browser settings and force blocking all cookies on this website. But this will always prompt you to accept/refuse cookies when revisiting our site.

We fully respect if you want to refuse cookies but to avoid asking you again and again kindly allow us to store a cookie for that. You are free to opt out any time or opt in for other cookies to get a better experience. If you refuse cookies we will remove all set cookies in our domain.

We provide you with a list of stored cookies on your computer in our domain so you can check what we stored. Due to security reasons we are not able to show or modify cookies from other domains. You can check these in your browser security settings.

We also use different external services like Google Webfonts, Google Maps, and external Video providers. Since these providers may collect personal data like your IP address we allow you to block them here. Please be aware that this might heavily reduce the functionality and appearance of our site. Changes will take effect once you reload the page.